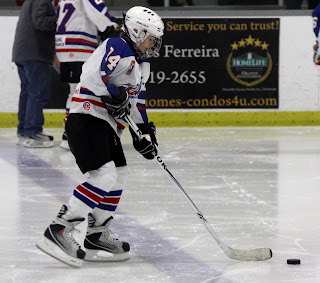 Imagine going to school each day and none of the other children want to play with you at recess.
Imagine being on a sports team and your teammates don’t accept you socially.
Imagine your child has special needs so significant you can’t leave him with a babysitter or grandparent for a rare night out.
Imagine after experiencing years of loneliness, frustration, worry as either the child or parent, you find a group which accepts you unconditionally and identifies with all your struggles.
Meet the Kawartha Komets.
Many in the community may have heard of the special needs hockey team but may not realize it’s much more than a sports team. The hockey is secondary to the life-changing impact its had for children and parents.
The Komets opened a new world for nine-year-old Kaeden Ball who previously had no friends to interact with in school or out of school, says his mother Lisa Mills.
“These are kids who are shunned by mainstream society,” said Mills, whose son is ADHD, has oppositional defiance disorder and mild intellectual and anger challenges. The players have a variety of intellectual, emotional to physical challenges.
By the end of his first night with the Komets Kaeden had friends, boys he could call to talk to, he had teammates.
“It's like a family,” Mills said. “We all care about each other. We're all there to support each other through good times and bad.”
Kaeden’s 11-year-old sister Brianna, who volunteers with the team, says it’s helped her brother open up at school, too.
“I have seen a lot of difference since Kaeden joined the team,” she said. “He started making more friends and talking to his friend Jonathan a lot. It’s been a big change.”
David and Carol Fisher founded the Komets after their son Matthew, 16, played one year of special needs hockey with a team in Don Mills. Instead of travelling each weekend, they created a local team. Their son Nathan, 15, also plays.
Sheryl Over’s adopted son Quinten, 15, who has fetal alcohol spectrum disorder, struggled in minor hockey.
“We tried to put him in the house league and on the ice there wasn't much difference between him and the other kids, his skills are quite good, but it fell apart in the change room. There was no opportunities for him socially because he can't keep up with the other kids developmentally,” she said.
“He can’t process the hitting quick enough so bodychecking is very dangerous for him. He doesn’t see the hits coming and we were afraid he was going to get hurt.”
The Komets changed that, instantly.
“It’s helped him to find peers who have common interests and abilities,” she said. “We so often want our kids integrated and accepted but sometimes they still feel isolated.”
It's also a better environment for the parents, Over said.
“The parents are really accepting, too, because all of our kids have challenges. I don't feel like I have to make excuses for him while he's playing which is really nice,” Over said.
Before the Komets, there were few things special needs children could enjoy together.
“This fills a void that was in the community,” she said.
Lynn Black calls the Komets a support group for parents, too. She and her husband Jeff registered their son Liam, 8, with the Komets last season.
“We always thought ‘Nobody gets it. Nobody really understands what we go through as parents,’” said Lynn.
“We have so many challenges with each of our kids but you go to the arena with the Komets and you’re just another parent. Everybody gets it. You can talk about how rough your week has been and everyone gets it. It’s totally a support group for the parents. As thankful as we are the team is here for the kids, it’s also here for us.”
“You don’t see judgment in the locker room if a child has a meltdown,” Carol Fisher said. “The parents can share and trade resources and information and support one another.”
It’s also a stress reliever for the children.
“They know there isn’t anyone there who is going to bully them or tease them,” Fisher said. “They can relax. There is no pressure to perform.”
Lorne and Wanda Hoehn are thrilled with the benefits their son Will has experienced.
“He had something more to talk to kids about at school,” Lorne said. “He wears his Komets hat to school every day. It’s a big source of pride for him. It’s helped with his self-confidence which is really important for kids who have these challenges.”
Liam became Will’s best friend and the highlight to their year was scoring their first goals within five minutes of each other.
“You couldn’t smack the smile off his face if you tried,” Lorne said.
Carol Fisher said a dedicated group of volunteers, about 10 a year – some with no connection to the players, coach the team.
“We have a wonderful group of very dedicated and committed volunteers,” said Carol. “They have also become like family.”
There were 12 Komets in year one, 22 in year two and 45 in year three including the first two girls.
“It just added another dimension to our team to have the girls and their families involved,” said David Fisher.
Next season they will ice three teams with players of similar ability placed together.
“To see this family grow has been so rewarding,” he said.
mike.davies@sunmedia.ca
Posted by Kawartha Komets at 7:33 AM