Bruce Plays With the Big Boys 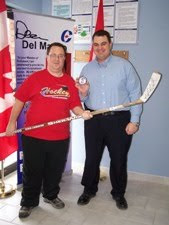 One of the Kawartha Komets' newest additions, Bruce Saltern, will suit up for the Conservative All-Stars when they take on the United Way All-Stars in their annual fund-raiser on January 30th, 2011 at the Peterborough Memorial Centre.

Bruce (pictured with Dean Del Mastro, the organizer of the game and our Peterborough MP) was excited to announce to his Komets' teammates at last Sunday's game in Ajax that he had been signed by the Conservative All-Stars.

Today's Peterborough Examiner listed the rosters for both teams. Bruce made sure that they listed him as a Kawartha Komet. He loves playing for us. We have listed Bruce's teammates below. 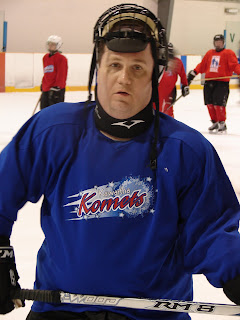 Posted by Kawartha Komets at 7:25 PM