NHLPA Chips In To Help Komets 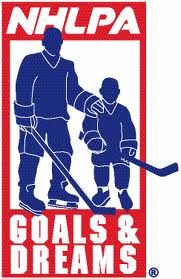 The following article appeared in today's Peterborough Examiner. Our thanks to Dale Clifford for an excellent story. Thanks so much for showing up at the rink for the Kawartha Komets' special occasion!


The NHLPA Goals and Dreams fund program came through for a local hockey club Saturday.

With retired NHL player and NHLPA member Steve Larmer of Peterborough on hand, the Kawartha Komets Hockey Club received a donation of 16 brand new sets of hockey equipment. It included 14 sets of out equipment and two sets of goalie equipment.

Some of it replaced some of the equipment from this original donation announced last fall which was stolen earlier this year.

Two of the founders and cocoordinators, the husband and wife team of David and Carol Fisher, said the donation will help kids, teens and young adults with special needs and challenges realize their dream of playing hockey.

The Fishers' nephew, Mike Fisher of the Ottawa Senators, was named honorary captain of the team.

The presentation was made before the Komets began their second season with a practice at the Evinrude Centre Saturday morning.

"It's great to see how this touches peoples lives," said Larmer. "It's a special kind of program where the NHLPA is glad to help."

The Komets feature between 25-30 players ages six to 20. A not-for-profit organization, the program was launched in 2009 to give girls and boys, teens and adults with special needs an opportunity to play the game they love, said Fisher.

"This (the donation) meant a lot to me and them (the players)," he said. "The joy of getting the new equipment was a thrill for them. It was thrill for Steve, too, to come here and be with the kids."

Affiliated with Special Hockey International, the Komets practice or play a game once a week during the hockey season against such teams as the Durham Dragons, the Don Mills Diamonds, the Grandravine Tornadoes and the Newmarket Nighthawks.

They have a coaching staff of about seven.

"Every player is given an equal amount of ice time regardless of their skill level, stated Fisher. "Our coaching staff is familiar with the challenges these young people face and give our players a fun-filled, positive, life-changing experience as they build character, skill levels and team spirit that will last a lifetime."

"It (Goals and Dreams) was formed in 1999 and since then has donated $17 million (and full sets of equipment) to about (economically challenged) 15, 000 children in 22 countries," said Larmer.

"It has meant a lot the NHLPA has been able to help children around the world."

"It's pretty cool," said Matthew, about receiving the equipment and having Larmer there.

Jim Glynn, one of about seven coaches/volunteers with the team, said it was special day.

"It's fantastic how the NHLPA came through for the kids," he said.

"I can't say enough about Steve being here and they doing this."

Posted by Kawartha Komets at 10:53 AM