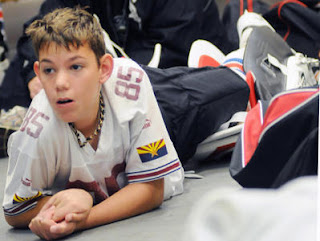 Here's the story about the Kawartha Komets that appears in today's (October 20th) edition of Peterborough This Week. Thanks to Todd Vandonk for his excellent coverage. One of our goaltenders, Colin Gillis-Bateman, is shown being fitted with new goalie pads.

“This is very good thing for parents that a can’t afford equipment. Now more kids can play hockey,” explains the 13 year old.

Former NHL star and Peterborough native Steve Larmer represented the NHLPA and took time to meet with Komets’ players and parents on Saturday. Larmer says the Goals and Dreams program has been around since 1999 and has donated more then $17 million to grass-roots programs in 22 different countries.

“This program has given over 50,000 kids a chance to play hockey that otherwise wouldn’t have that chance and there’s so many different life skills that you can learn from playing hockey. It’s a great opportunity for everyone and a program the players are very proud of,” explains Larmer.

The Komets began their second season with a practice on Saturday.

“I am going out there to shoot a few pucks and get used to the ice again,” explains Tuck.

The organization, founded by David and Carol Fisher, was launched in 2009 to give children, teens and adults with special needs an opportunity to play the game they love. According to Mr. Fisher, the team consists of players with Autism, Tourette’s Syndrome, Down Syndrome, and many other challenges. Players are male, female, and between six and 31 years old he adds.

“To see the look on the parents faces, as they see their child out their playing hockey for the first time, was priceless,” explains Mr. Fisher.

Affiliated with Special Hockey International, the Komets competition comes from teams in Durham, Don Mills, Grandravine and Newmarket. According to Mr. Fisher every player is given an equal amount of ice time regardless of their skill.

“The only requirement is that the player must be able to stand on skates,” explains Mr. Fisher

Posted by Kawartha Komets at 4:35 PM