The Peterborough Wolves floor hockey team have been named the Special Olympics Ontario 2020 Team of the Year.

CONGRATULATIONS to the coaching staff, Ron Cambridge, Joan Moriarty and Andrew Snead and the all the players. Several members of the floor hockey team also play for the Kawartha Komets Special Needs Hockey Program...Jacob Zitman, Ryan Blinn, Quinten Over, Brandon Allen (Vansickle) and Stone Shearer. Two former Komets are also on the team...Dylan Armstrong and Michael Brioux. We're proud of you all.

The Peterborough Examiner published the following article, written by Mike Davies, this week: 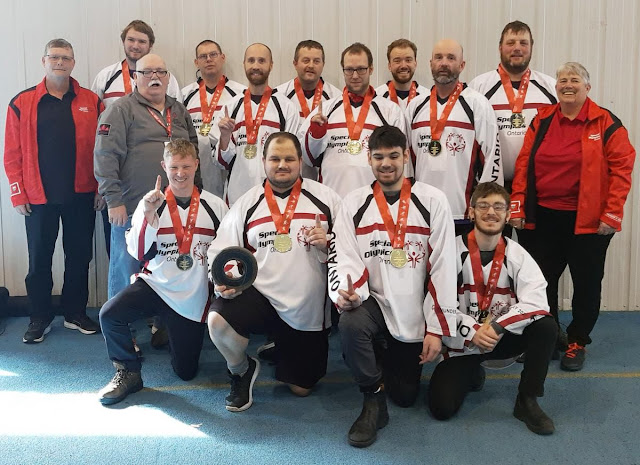 In March they won the gold medal representing Ontario in the A Division of the Special Olympics National Winter Games in Thunder Bay.

On Monday, they were named the Special Olympics Ontario 2020 Team of the Year. They are one of two Peterborough teams honoured this year as the St. Peter Saints traditional basketball team was named School Team of the Year.

“This just caps off the great season we had and our great trip to nationals,” said Wolves coach Ron Cambridge.

“Being recognized by your province just gives us inspiration for next year.”

The Wolves were undefeated in five games at nationals and rallied from a 2-0 deficit in the final to beat British Columbia 4-3 on Michael Brioux’s goal with two seconds left.

“It’s an honour to get this award,” said player Dylan Armstrong, 27.

“It means a lot and means that we are being looked at as a team that’s on the cusp of making it bigger. What made our team special is we all got together and figured out what our weaknesses were and what our strengths were and we put them all together.”

Posted by Kawartha Komets at 12:36 PM