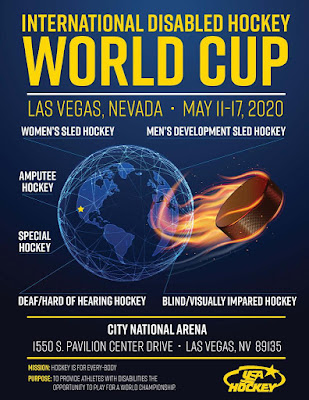 The inaugural International Disabled Hockey World Cup will take place May 11-17, 2020 in Las Vegas, Nevada. The event provides athletes with disabilities the opportunity to play for a world championship as these disciplines do not have enough teams or are not recognized by the international body to participate in the Paralympics.

The tournament will feature women's sled hockey, men's development sled hockey, deaf/hard of hearing hockey, blind hockey, special hockey and amputee hockey. Each discipline will contain four teams that will compete in a minimum of four tournament games. There will be a championship game for each discipline, except for special hockey in which all participants will be recognized. The International Disabled Hockey World Cup will follow the same rules normally used by each disciplines International Federation. For more information, please email:

Each member organization of CNSH (Canadian National Special Hockey) was invited to nominate a player(s) to participate in the Special Hockey competition at the International Disabled Hockey World Cup.  There were commitments, requirements and qualifications that each player had to meet.  The Kawartha Komets Special Needs Hockey Program nominated Brandon Van Sickle, a 10-year veteran of our organization who plays on the Senior PHOENIX team. Brandon is the son of Andrew Snead and Robert Krueger. 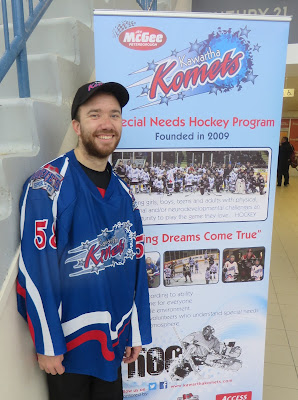 He’s an enthusiastic and polite young man…a joy to have on any team. Brandon excels in soccer and floor hockey and has traveled extensively with Special Olympics…competing in the World Games in soccer at Abu Dhabi…winning a bronze medal and winning gold at the Nationals, in soccer, in Antigonish, Nova Scotia.  He also plays baseball, swims and is involved in 10-pin bowling.  He displays excellence in all he does!  We’ve watched Brandon improve and excel with each passing season and he is certainly an excellent candidate to represent Canada at the Hockey World Cup.

The Kawartha Komets Special Needs Hockey Program is proud to announce that Brandon has been accepted to represent Team Canada.  Team Canada will play a minimum of four (4) games against Special Hockey International teams from the USA, United Kingdom, Norway, Finland, Sweden and Denmark.  This is a first-time event for Team Canada.

Everyone in the Kawartha Komets organization wishes Brandon the very best as he represents our country and the City of Peterborough.

Posted by Kawartha Komets at 4:01 PM