Thank You, Mary McGee, for your 8th Season of Komets Sponsorship 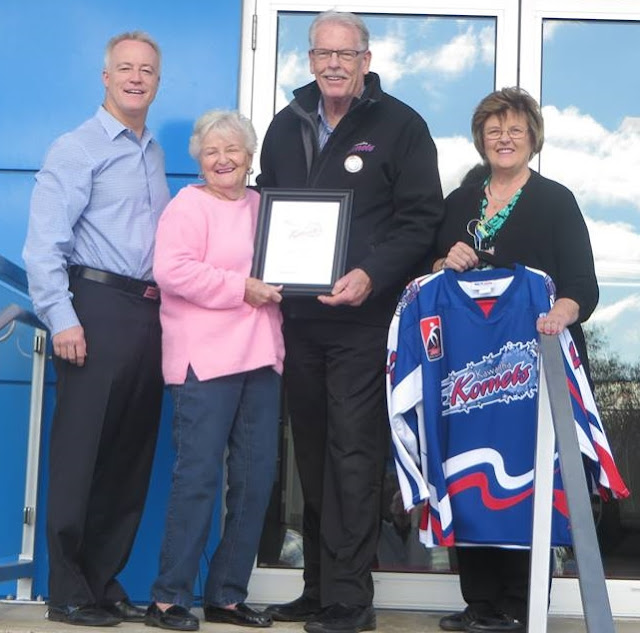 The Kawartha Komets are thrilled to announce that long-time sponsor, supporter, friend and encourager, Mary McGee, has come forward again before the 2019-2020 season with her sponsorship in memory of her late husband Jack McGee, founder of Jack McGee Chevrolet Cadillac.

The Komets are preparing to launch our 11th season of "special needs hockey" and this is the 8th year that Mary McGee has partnered with us.  It was our pleasure to visit Mary recently to thank her for her ongoing sponsorship which enables the Komets to continue to BLAZE for another season.

The following quotes by Mrs. McGee appeared in an article by Sports Director Mike Davies in the Peterborough Examiner back in 2012 when Mary decided to become the major sponsor for theKawartha Komets Special Needs Hockey Program:

"Jack McGee cheered for the underdog and the Kawartha Komets is the type of team he would have supported", says his widow.

That’s why Mary McGee decided to answer the special needs hockey team’s plea for a major sponsor. She has donated $10,000 in memory of Mr. McGee, founder of Jack McGee Chevrolet Cadillac, to help the fledgling team.

“Jack always loved kids and always loved the underdog,” said Mary. “These are the kind of people who sometimes slip through the cracks. I thought this would be a perfect way to remember Jack and to help these people.”

“I’ve been trying to find something to do in memory of Jack and the right thing didn’t seem to come along,” she said. “I thought this sounded like a perfect fit.”

“Jack was always interested in helping kids and sponsoring teams,” she said. “He was always there when someone needed a handout. I can't remember Jack saying ‘no.’ We usually do this anonymously, we have preferred to do it that way, the only reason I told the Fishers it was all right to mention it is because I wanted to do it in memory of Jack. He was a very special man to a lot of people.”

Posted by Kawartha Komets at 12:32 PM