Twenty-one Peterborough Special Olympics swimmers brought home 56 ribbons from the Durham Invitational Swim Meet held in Pickering on March 17.
Four (4) of our Kawartha Komets Special Needs Hockey Program's players competed and won ribbons.
Jeff Anderson, from the Saturns team, won the 50m free. Matthew Ludlow, from the Phoenix team, placed first in the 25m free. Gillian McHugh, from the Meteors team, finished second in the 25m free and third place in the 25m back. Miriam McHugh, from the Meteors team, captured gold in the 50m free, silver in the 50m back and bronze in the 25m back and 25m free. 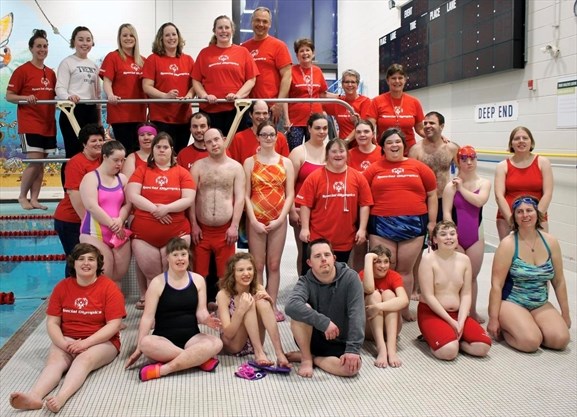 CONGRATULATIONS to these Kawartha Komets players and to all the Special OIympian Swimmers who did so well at this Swim Meet.  CONGRATULATIONS, as well, to Debbie Quinlan, Jennifer Scates and all the coaching staff on your success.

Peterborough Special Olympics will send 29 swimmers to the provincial qualifying meet in Aurora on May 26.

Posted by Kawartha Komets at 8:54 PM