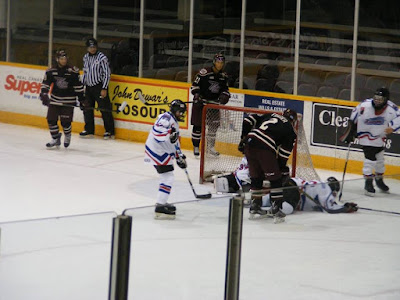 On Sunday, November 1st a special event took place bringing together two hockey teams with totally different mindsets and agendas.  My only regret was that the Peterborough Memorial Centre wasn't filled to capacity to witness a camaraderie seldom seen in sports.

The 4th annual fundraising game between the Peterborough Petes and the Kawartha Komets Special Needs Hockey Program took place at the Peterborough Memorial Centre and from all reports the Petes were just as excited as the Komets to take to the ice. After a hectic weekend with a home game on Thursday night, a game in Kingston on Friday evening and a visit to AFB Trenton on Saturday you might have expected a half-hearted effort on Sunday from a bunch of tired hockey players.  Wrong!  Dead wrong!

During the brief warm up for the Petes and the Komets’ Junior team it was obvious that the OHL team was relishing their interaction with these special needs hockey players.  Many on the Junior team had played their first-ever hockey game the day before and now they were rubbing shoulder pads with their heroes.  One Petes’ defenseman was seen on one knee helping a young boy who was about to lose his pants.  Heartwarming to say the least.

Watching the Petes play down to the level of their opposition was a “treat to behold”.  Following the 20 minute Junior game the Komets were involved in a brief shoot out where every player had a chance to put the puck past a Petes goaltender.  Yes, it may have taken a minute or two to get from center ice to the net but when the puck crossed the goal line and the crowd cheered a young hockey player experienced the thrill of a lifetime.  Twenty minute games for both the Intermediates and Seniors followed.

When you pause to consider the dynamics of this game you realize how rewarding, exciting and fulfilling this was for the Komets players.  Every one of the sixty plus players have special needs.  Many have never played hockey before, many are the last ones picked for a team in playground sports, many have never had a sleepover or been invited to a birthday party.  Here they were, playing against skilled OHL players, many of whom have aspirations to reach the NHL.  If you were privy to the hopes and dreams of some of the Komets players you’d know that many of them hope to reach the big time as well.  But, sad to say, the physical, emotional or neurodevelopmental challenges that many of these individuals struggle with will, in all probability, derail their dreams.

Listening to the interviews with Petes players before and after the game you understand that many of them, understandably, take their hockey skills for granted but when they’re made aware of the roadblocks these Komets players deal with they realize how blessed they themselves really are.

The event was a huge success.  Funds were raised that will help send the Kawartha Komets players to their annual special needs tournament next year.  But…the most thrilling outcome was the realization on the part of all participants that the game of hockey can bring athletes with varying levels of abilities together for a worthy cause and everyone goes home a winner.
Posted by Kawartha Komets at 12:51 PM