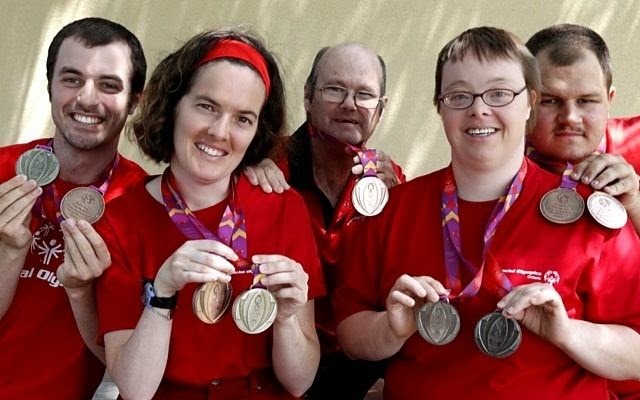 For a special group of Special Olympians, it was an experience they will never forget.

Not only did six members of Special Olympics Peterborough and area enjoy success on the podium at the Special Olympics National Summer Games in Vancouver earlier this month, they brought back memories that will last a lifetime.

Representing one of four Team Ontario contingents, the team of five bowlers and one swimmer garnered 11 medals in total, including a bronze in team five-pin bowling.

The bowling team comprised Michael Brioux, Katie Galloro, Matt Ludlow and Jeff Cassidy of Peterborough and Tim Keenan from Lindsay. Kelly Gellatly competed in swimming. It was considered the largest local representation ever in bowling.

On the medal side of things, along with the team bronze, Ludlow, 25, and Galloro, 34, also captured individual silver medals while Brioux, 20, and Cassidy, 36, won single bronze on the lanes. Gellatly, 41, won two silver in the pool. The bowling team finished 17 pins out of first.

It was the fourth national championship for Gellatly, who swims the 100-metre individual medley and 50m backstroke and breaststroke, third for Keenan, 47, and second for Galloro. It was Galloro’s first time bowling, joining other national first-timers, Cassidy, Brioux and Ludlow.

While they spoke of their athletic success, they also talked about what it meant to be there, the people they met, where they were and other activities such as the opening and closing ceremonies. For many, it was their first time this far west and on a plane.

“The whole experience was awesome,’’ said Ludlow. “The opening ceremonies were great. The city is beautiful. I went in the ocean. It was great to get the medals. We worked hard to get that far.’’

For the championship, they stayed together in residence at the University of British Columbia.

“It was exciting meeting new people and making new friends but it was sad when it was over to see them go,’’ she said, also giving credit to the many volunteers she met. “I will always remember them.’’

Kennan added: “It was exciting to win the team bronze but also see the city and meet people. We really did well and feel good about that.’’

It was the first time for Gellatly competing in the western province.

“It was pretty awesome,’’ she said. “I got to hang out with friends and meet new people.’’

Local coaches, including people like Paul Brioux, Mary Harran and Bill Strode were impressed with their medal count as well as their personal experiences.

“For six people from small communities to get 11 medals is amazing,’’ said Paul Brioux. “Our bowlers were in the top group of eight.’’

Harran added: “I am so proud of them for everything they did. They made new friends and were great teammates.’’