Can You Match This? 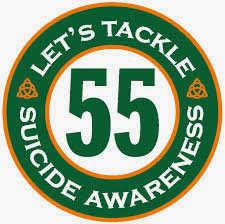 Here is a media release in the form of a challenge that we sent out this week:


The Jack McGee Kawartha Komets recently announced their commitment to donate the first $1,000 raised in their MISSION to MICHIGAN campaign to Team 55 Tackles Suicide Awareness.

Team 55 was started this fall by Dave and Heather Pogue, with the Canadian Mental Health Association and Adam Scott Lions Junior football team, following the tragic suicide of their son and Lions' alumnus Mitchell Pogue.  Earlier this fall Dave Pogue stated, “We started this to give people a platform to talk about mental health and make it easier to talk about suicide.”

The Komets wished to show their support of this initiative and their Board of Directors approved the donation of the first $1,000 raised to this worthwhile cause.

The players on the Komets’ four teams have been busy canvassing at local businesses and raising support from family and friends for the MISSION to MICHIGAN.  Last weekend $1,000 was raised by several of our players at National Sports.  Funds will continue to be raised from now until next spring as the Komets prepare for their Special Hockey International Tournament in Fraser, Michigan in May.

The Komets are issuing a challenge to any local business, organization, service club or individual to match the $1,000 that the Komets teams have already raised.  Recognition for the donor will be given at the December 8th game between the Petes and the Komets when the cheques are presented to Team 55.

On December 8th, our Peterborough Petes will face off against the Kawartha Komets at 3:00 p.m. at the Peterborough Memorial Centre.  Admission is FREE but donations towards the MISSION to MICHIGAN campaign will be accepted.

Together we are “Making Dreams Come True”.


Posted by Kawartha Komets at 9:56 PM