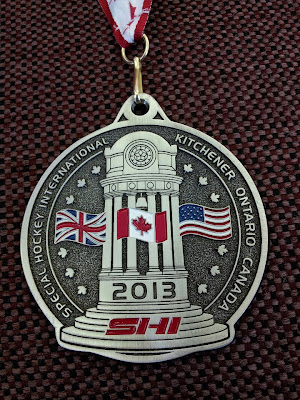 All three teams with a total of 51 players participated with each team playing four games.   A total of 50 teams competed in the three-day event with entries from England, the United States and Canada.

Opening ceremonies were held in the Kitchener Memorial Auditorium (The Aud), home of the Kitchener Rangers, one of the tournament’s primary sponsors.

The festivities wrapped up with a Saturday evening banquet attended by 2,000 players, families and friends. Next year’s Special Hockey International Tournament will be held in Ann Arbor, Michigan and plans are already in the works for the Jack McGee Kawartha Komets to participate.

Posted by Kawartha Komets at 4:55 PM