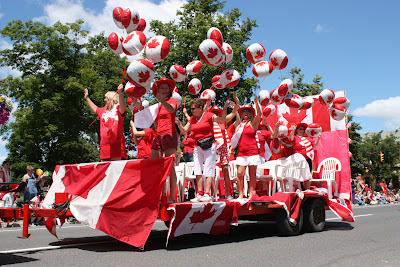 The Jack McGee Kawartha Komets will be participating in Sunday's Canada Day Parade, proudly displaying the Jack McGee dealership's logo on our banners and car magnets.

Parents, players, coaches and volunteers are asked to meet on London Street just east of George Street between 11:00 and 11:30 A.M.  The parade begins moving down George Street from City Hall at 1:00 p.m.

The Jack McGee Kawartha Komets contingent will be led by Junior coach Dave Tuck's pick-up truck and Jim and Sharon Legon will bring up the rear in their classic 1968 Chrysler Imperial convertible.

Players and some parents will be walking in between these vehicles in their Komets jerseys waving flags or carrying balloons.