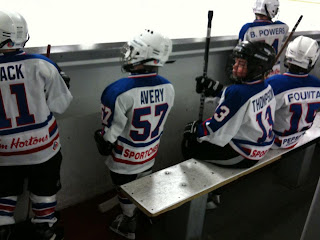 Today (Sunday, November 6th) the Kawartha Komets Juniors played their first game of the season against the Durham Dragons in Ajax.

The Dragons came out breathing fire (just a figure of speech) but the Komets came away victorious (but who was really keeping track).

The goal (no pun intended) was to have fun, lots of it, and these young players were not disappointed.
For several of the Komets this was their first game ever...playing organized hockey for a "real" team.
Liam Black, Andrew Avery and Aaron Thompson (pictured) were excited to suit up for the first time.
It was a great game to watch and now we are counting down to next Saturday's date at the Peterborough Memorial Centre.
Blaze Komets, Blaze!
Posted by Kawartha Komets at 5:10 PM