PRESS RELEASE
Saturday, April 2nd, 2011
The Kawartha Komets Special Needs Hockey Program has been busy for the past few months raising money to BUS THE BOYS TO BOSTON.
On Saturday, April 2nd, the Komets gathered at the Sport Chek store in Lansdowne Place to receive a generous donation which put their fundraising campaign “over the top”.
Sport Chek stores operate as part of The Forzani Group Ltd. based in Calgary, AB.  The sponsorship was part of their “Power of Sport for Kids” program.

According to their web site, "The Forzani Group Ltd. is proud of the Power of Sport for Kids community giving program. Introduced through Sport Chek stores nationally in October 2005, its purpose is to provide opportunities for sports, play and physical activity to deserving children who may not otherwise have the resources to take part. This is a program that benefits children and provides them with the chance to experience the joy of an active lifestyle." 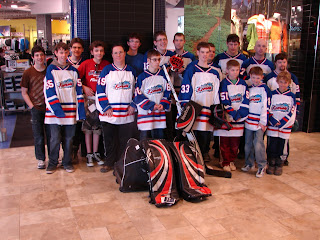 The Kawartha Komets will be sending 24 players and their families to the Special Hockey International Tournament in Boston, April 28th – 30th, leaving on the 27th and returning home May 1st.
The Komets, formed in April 2009, completed their 2nd season last Saturday with both teams winning their games at Grandravine in Toronto.
Note:  Click on pictures to enlarge for better viewing.

Posted by Kawartha Komets at 10:19 PM