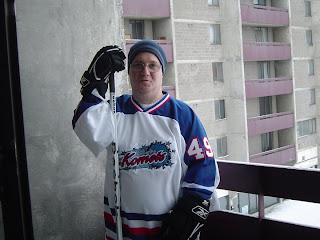 The Kawartha Komets' star defenceman Bruce Saltern switched jerseys this afternoon as the Conservative All-Stars did battle with the United Way All-Stars in local MP Dean Del Mastro's Annual Fund-Raiser for the United Way campaign.
Several Komets players were on hand to cheeer Bruce along.  No boos were allowed.  I'm convinced that Bruce the Juice, as he is fondly called, was the star of the game.  He certainly had the most fans.  The Komets chanted "We Want Bruce" and convinced the coach to get him back on the ice before he had chugged his between-shifts gulps of water. 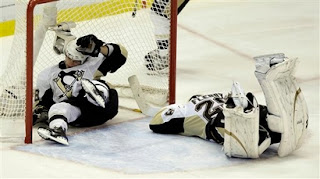 We had lovingly encouraged Bruce to "fill the net" with pucks (of course).  With the game winding down and the Conservative All-Stars trailing 11-8, Bruce was awarded a penalty shot.  We knew he'd score!  Bruce always does!  The puck was placed at center ice.  Our man circled around, picked up the puck and rushed towards the opponent's net.  A quiet hush filled the arena.  Bruce wound up and shot...wide...but wound up in the net himself.  The crowd went wild!  Our man had done what we had asked him to do.  Fill the net.
Following the game Bruce whispered his secret to his admirers.  The coach has asked him to sliiiiiiiiiiide into the net...making the goaltender leave his crease.

Guess what? The official scorekeeper allowed the goal.  It wasn't enough to give the Tories a win but the fans left the building with a smile on their faces.
Bruce wasn't the first hockey star to fill the net.  We scooped some photos from our archives of other stars who chased goalies from their creases.
Bruce, you're our man!  We love you!  You gave your ALL!  You filled the net and made us smile!
Posted by Kawartha Komets at 6:38 PM