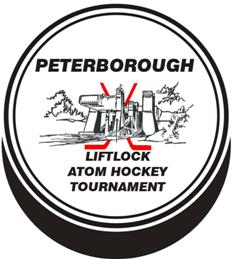 Here's an excerpt from the Peterborough Examiner's coverage in today's paper:


"Tournament executive Marc Oddie was the master of ceremonies and he introduced MP Dean Del Mastro, MPP Jeff Leal and Mayor Daryl Bennett, who all spoke, to begin proceedings which started about 45 minutes before game time.
Executive member Brian Johnson introduced Frank Lustic Memorial Award winner Cliff Gilmoure, who was joined by his wife Shirley and members of the Lustic family, including Frank's sons Darrel and Ron and widow Pat.
The Lustic award is presented annually to a person for volunteer work in and dedication to the Peterborough Community Church Hockey League or the tournament.
Executive Wayne Carter then presented a cheque to the tournament's charity of choice this year, the Kawartha Komets Hockey Club, a not-for-profit organization to give girls and boys, teens and adults with physical, emotional and/or neurodevelopmental challenges a chance to play hockey.
On hand were Komets founders David and Carol Fisher and goaltender Colin Gillis-Bateman."
- Dale Clifford, Peterborough Examiner Sports
Posted by Kawartha Komets at 10:13 PM