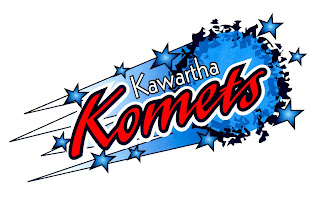 The Kawartha Komets shone brightly at the Evinrude Centre Tuesday.

The hockey team, featuring players with special needs, put on a five-minute exhibition before the more than 300 fans who attended the OJHL game between the Peterborough Liftlock Stars and Lindsay Muskies, won by the Stars 5-4.

The Komets team features 36 players altogether and 18 made it Tuesday to showcase their abilities on ice during the first intermission.

The Stars donated proceeds of the game to the Komets Bus The Boys To Boston campaign, to take part in the Special Hockey International Tournament April 28-20.

According to David Fisher, founder/coordinator with his wife Carol -of the Komets, $2,400 was raised between gate receipts and a silent auction, which featured an autographed jersey donated by the Ottawa Senators Mike Fisher, a Stars alumnus and honorary Komets captain; a framed Roger Neilson print and an autographed Carrie Underwood CD.

"The Stars bent over backwards to support us," said Fisher. "They were very accommodating. Our players were off the wall in the dressing room, they were so excited. It was a great night because we had a lot of fans with Peterborough playing Lindsay."

The Stars were happy to be part of the night and help out.

"We believe in this kind of organization and giving back," said Stars GM Scott Donato. "We do the best we can to help and this is going to help a team get to Boston. They are a young team and it gives them exposure. It's another group Peterborough can be proud of. It was good to have it when Lindsay was in. It's a good rivalry."

Fisher said the tournament in Boston would likely attract more than 100 teams, with 30 teams registered in Canada and 80 in the United States. He said there were also teams in England, Russia and Sweden.

"It's a great time for bonding and camaraderie among the players," he said. "We play four or five games but no one cares about the scores or winning. It's being there and part of it. It will be a 13-hour bus ride and a lot of fun."

In the OJHL encounter, Rickey Buehler scored three goals for the Stars, including the winner, a power play tally to snap a 4-4 deadlock at seven minutes of the third period. Turner Evans and Mike Hennessey had the others.

The Stars outshot the Muskies 36-35 with Zac Fryia besting Luke Bierworth in goal. The Stars host Dixie at 7 p.m. Friday.

NOTE: For additional information on the Kawartha Komets contact David or Carol Fisher at 750-0655 or visit the team's web-site at www.thekawarthakomets.blogspot.com

Posted by Kawartha Komets at 8:59 AM